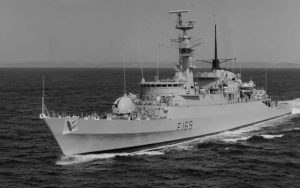 HMS Amazon was the first Type 21 frigate of the Royal Navy. Her keel was laid down at the Vosper Thornycroft shipyard in Southampton, England. The ship suffered a fire in the Far East in 1977, drawing attention to the risk of building warships with aluminium superstructure. HMS Amazon was sold to the Pakistan Navy 30th September 1993 as PNS Barbur and was decommissioned in December 2014 and is currently awaiting disposal

Royal Navy Service
In 1977 ”Amazon” took part in the Fleet Review, Royal Navy Fleet Review, of the Royal Navy at Spithead in celebration of HM the Queen’s Silver Jubilee. ”Amazon” was the only unit of her class to not participate in the Falklands War, as she was in the Persian Gulf at the time on Operation Armiller, but did arrive on station just after the end of the conflict to assist. By the mid-1980s the surviving Type 21s were suffering cracking in the hull and so she was taken in for refitting, with a steel plate being welded down each side of the ship. At the same time modifications were made to reduce hull noise. Four Exocet launchers were also fitted in ‘B’ position, the last of the class to be so fitted.