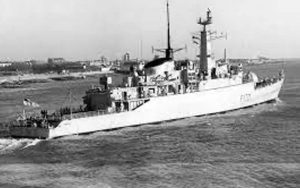 HMS Antelope was the second Type 21 frigate of the Royal Navy and entered service in July 1975. She was built by Vosper Thornycroft Shipbuilders. She was sunk by Argentine bombs on 24 May 1982

1974-1976 Cdr Nicholas Hill-Norton
1976-1977 Cdr Brian W Turner
1977-1979 Cdr Patrick Rowe
1979-1981 Cdr Christopher Williams
1987-1982 Cdr Nicholas J Tobin
Royal Navy Service
Antelope took part in the Falklands War arriving in the area of operations on 21 May 1982. On 23 May 1982, while on air defence duty at the entrance to San Carlos Water, protecting the beachhead established two days before, she came under attack by four Argentine A-4B Skyhawks of Grupo 5. The first pair attacked from astern, with the flight leader breaking off his attack after one of Antelope’s Sea Cat SAMs exploded under the port wing of his aircraft.

The pilot, Capitán Pablo Carballo, managed to nurse his aircraft back to Rio Gallegos. The second aircraft on this flight pressed home his bomb run and put a 1,000 pound bomb in the Antelope’s starboard side, killing one crewman, Steward Mark R. Stephens. The bomb did not explode and the Argentine aircraft was damaged by small arms fire.

The second pair of Skyhawks attacked minutes later from the starboard quarter. During this attack, one of the Argentine jets, piloted by First Lieutenant Luciano Guadagnini, was hit by the ship’s 20mm cannon before crashing through Antelope’s main mast. Guadagnini was killed, and his bomb pierced the frigate’s hull, also without exploding.[2] Antelope also fired a Sea Cat at what was believed to be a fifth attacker, but this was Capitán Carballo, who was still trying to establish if his aircraft was fit to fly. This missile missed, but passed less than 10 metres from Carballo’s cockpit.

After initial damage control efforts, Antelope proceeded to more sheltered waters so that two bomb disposal technicians from the Royal Engineers could come aboard and attempt to defuse the two unexploded bombs. One of the bombs was inaccessible because of wreckage; the other had been damaged and was thought to be in a particularly dangerous condition. Three attempts by the bomb disposal team to withdraw the fuse of this bomb by remote means failed.

A fourth attempt using a small explosive charge detonated the bomb, killing Staff Sergeant James Prescott instantly and severely injuring Warrant Officer Phillips, the other member of the bomb disposal team. The ship was torn open from waterline to funnel, with the blast starting major fires in both engine rooms, which spread very quickly. The starboard fire main was fractured, the ship lost all electrical power, and the commanding officer, Commander Nick Tobin, gave the order to abandon ship. Tobin was the last person to leave the ship; about five minutes after his departure, the missile magazines began exploding.