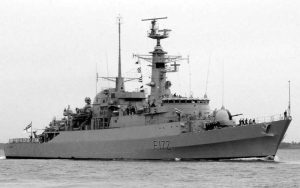 HMS Ambuscade was the third Type 21 frigate of the Royal Navy and entered service in August 1975. She was built by Yarrow Shipbuilders Ltd, Glasgow,Scotland. She was sold to Pakistan in 1993 as PNS Tariq and is currently under discussion to be brought back to the UK for preservation as a museum ship.

In 1983 Ambuscade collided with USS Dale in the Indian Ocean, resulting in part of her bows being torn away. Ambuscade was laid up in Bombay for 6 weeks while a new bow was constructed and fitted.