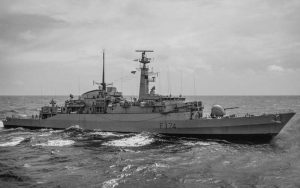 HMS Alacrity was the sixth Type 21 frigate of the Royal Navy and entered service in July 1977. She was built by Yarrow Shipbuilders Ltd, Glasgow,Scotland. She was sold to Pakistan in 1993 as the PNS Badr and was decomissioned in April 2013

The most notable incident involving Alacrity was the sinking of the Argentine supply ship ARA Isla de los Estados by gunfire over the night of 10–11 May 1982, near Swan Islands. At the time, Alacrity was on a mission to establish whether or not the Argentines had mined the north entrance to Falkland Sound. Alacrity was slightly damaged by splinters from an Argentine bomb on 1 May.

As Alacrity left the Falkland Sound on 11 May, the Argentine submarine, San Luis was reported to have fired two torpedoes at Alacrity and her sister ship Arrow. Both missed, and the ships rejoined the task force.

As with the other surviving Type 21 frigates, Alacrity was suffering from cracking in her hull by the mid-1980s. She was taken in for refitting, and a steel plate was welded down each side of the ship. At the same time modifications were made to reduce hull noise.