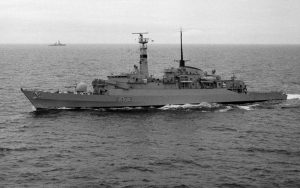 HMS Arrow was the fourth Type 21 frigate of the Royal Navy and entered service in May 1975. Built by Yarrow Shipbuilders Ltd, Glasgow, Scotland, she was sold to Pakistan in 1994 as the PNS Khaibar, she has since been decommissioned and was used as target practice and sunk during SEASPARK 2022 naval exercise

1975-1977 Cdr Nicholas J Barker
1977-1979 Cdr William L Davis
1979-1980 Cdr James D McPetrie
1980-1982 Cdr Paul J Bootherstone
1982-1984 Cdr Christopher W Pile
1984-1986 Cdr Anthony G McEwen
1986-1988 Cdr Christopher Beagley
1989-1990 Cdr Richard M Davey
1990-1991 Cdr Stephen C Jermy
1991-1993 Cdr David C Goodall
Royal Navy Service
Arrow participated in the Falklands War, and had the dual distinction of being both the first British warship to fire on the enemy (whilst firing on land forces at Port Stanley), and the first British warship to be hit by enemy fire, after being straffed by an Argentine Air Force fighter. On 4 May 1982 she assisted in extinguishing the fires and evacuating the crew of the Type 42 destroyer Sheffield, which had been struck by an Exocet missile. The crew showed conspicuous bravery in this rescue effort, saving 225 of the crew of HMS Sheffield, and Arrow’s captain, Commander (later Captain) Paul Bootherstone was subsequently awarded the Distinguished Service Cross for gallantry during the action. Arrow also helped extinguish the fires on the Rothesay class frigate Plymouth, on 8 June 1982.

By the mid-1980s Arrow was suffering from cracking in her hull. Much of this had first arisen during the Falklands conflict, when engineers were obliged to weld steel plates and girders to parts of the ship where cracks were opening up in the aluminium superstructure. After the war she was taken in for refitting, with a large steel plate being welded down each side of the ship. At the same time modifications were made to reduce hull noise. The vessel continued in service until 1994, and was decommissioned and removed from the fleet on 1 March that year.