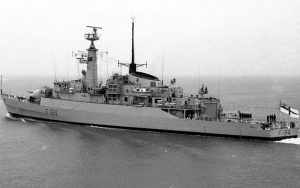 HMS Ardent was the seventh Royal Navy Type 21 frigate and entered service in October 1977. Built by Yarrow Shipbuilders Ltd, Glasgow, Scotland She was completed with Exocet launchers in ‘B’ position. Ardent was lost in action on the 21 May 1982 during the Falklands War.

1977-1979 Cdr Anthony G M A Provest
1979-1980 Cdr Michael D Bracelin
1980-1982 Cdr Alan W J West
Royal Navy Service
Ardent took part in the Falklands War, where she was attacked by Argentine aircraft in the Falkland Sound on 21 May 1982. The air strikes resulted in the sinking of Ardent the next day and the loss of 22 members from the 199 strong crew who abandoned ship onto HMS Yarmouth.

The survivors returned to the UK and established the HMS Ardent Association in a hope to foster and promote the name HMS Ardent and provide a focal point to remember our fallen crew-mates. The association president is Admiral the Lord West of Spithead who was First Sea Lord and Commander in Chief of the Royal Navy from 2002 until 2006 and the Commanding officer of HMS Ardent in the 1982 Falklands War. Lord West was the last to leave the sinking ship and was subsequently awarded the Distinguished Service Cross (DSC) for his leadership.